Oh What a Week! Fingers Crossed for Fergus.

I know this is Flo’s ‘space’, but today I’m writing about Fergus, my lovely 7 year old cat.  She has the sweetest nature of any cat I’ve owned, except in the case of her relationship with George, towards whom she harbours nothing but ill will.  I have been running on adrenaline and iced coffee since Monday morning, so please forgive the standard of writing!

Tell me why I don’t like Mondays….
On Monday morning, as I reversed out of the driveway the unthinkable happened.  Fergus was tucked in behind the front wheel and I ran over her.  I cannot begin to tell you how awful that feeling is, the very second you become aware of what has happened.  I stopped the car immediately and looked to find her paw still trapped under the wheel, so had to move the car again so that she could free herself.  At that point she ran (possibly chased by Flo, who was excited by the commotion) to one of the chairs under the outdoor dining table, where I caught up with her.  She was sitting there with her front paws on the ground and her back paws on the chair, motionless.  Very carefully I picked her up and took her upstairs, got her basket out and gently put her inside.  Her breathing was already frantic and she didn’t appear to be moving her back end at all.  Sheer and utter horror.

Hiding behind a palm frond

I rushed her down to the v-e-t, which was opening just as I got there, and we were taken straight through.  The v-e-t immediately took her out to their treatement room out the back so that he could assess her, while I waited back in the waiting room.  A lovely lady came over and sat next to me and put her arm around me.  I don’t know who she was or anything else about her, except that she had an appointment for her dog and was first up that morning.  She had been in the same horrible situation just a few weeks ago.  I didn’t get a chance to thank her for her kindness.

There was little that the v-e-t could tell me at that point, but they had given Fergus some medication to stabilise her breathing, and from their initial examination she appeared to be able to take some weight on her back legs, but he really just wanted to give her a chance to settle down and stabilise before they tried to do anything else as they didn’t want to push her over the edge.

Later that morning they tried to take some x-rays but the whole process was too much for Fergus and she was getting stressed, so they stopped after only getting one (not very good) film.  He thought that her chest was okayish from that but really couldn’t say for sure and wanted to leave her a while longer.

I spoke to the v-e-t again that evening and he said that things were looking significantly better for her than they had that morning but that we were still firmly in the woods and we would have to wait and see whether she made it through the night.

Tuesday
I received a phone call first thing to say that Fergus had made it through the night and was comfortable.  Huge relief.  The plan was to try to get some more x-rays, which was duly accomplished.  These showed that her lungs had collapsed, which explained her laboured breathing, but her diaphragm was intact.  Mercifully her pelvis and spine were also fine.  The x-rays also showed that she still had food in her digestive system and a lot of gas backed up so the emphasis was to get that moving so as to relieve pressure on her chest cavity. When I went in to see her she managed to look up and open and close her mouth, but no sound came out. 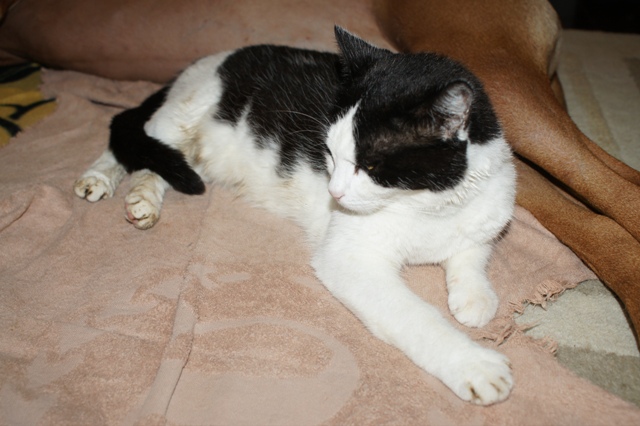 Wednesday (this morning)
I phoned the v-e-t first thing to find out whether she had made it through another night, a horrible call to have to make.  I had had an awful feeling last night and didn’t sleep well at all, fearing the worst.  The receptionist said that yes, she had made it through but that the v-e-t wanted to speak to me, however he was in a consultation at that time and would have to phone me back.  I was very worried.  When I spoke to him he just wanted to tell me how amazed he had been when he had checked her this morning.  She was standing up and arching her back at him – I don’t blame her, he’d given her an enima the day before.  He said it really was quite remarkable, she was like a different cat.  He asked me if I was sure that I had actually run over her.  Sadly, I am sure.  She has quite an abrasion on her back leg, but it isn’t broken, incredibly.  The latest x-rays show that she has a few fractured ribs but there isn’t an awful lot that we can do about them at the moment.  She still has food in her stomach which the v-e-t is doing everything he can to gently encourage it through to her instestinal tract.  We think that the tyre went right over her middle, just catching the bottom of her ribcage, so it’s highly likely that there is more damage in there that we can’t see and the approach really is to just take it easy and let her get stronger before we even consider any sort of invasive procedure.

I went in to see her and her newest x-rays this evening and it really is quite incredible.  She stood up for me and rubbed against my hand and the cage.  At one point she wanted to try and jump out of it…. noooooooooo!  She managed a couple of audible meows (with the emphasis firmly on ‘ow’) and a lot of pleased-to-see me purrs.  I am totally amazed by her ability to tolerate such trauma and so grateful that she is still with us.  I know that things can change in a heartbeat… it’s still early days, but we’re in for the long haul and she’s certainly proving to be a tough little cookie.

We will all be sleeping a little more soundly tonight. 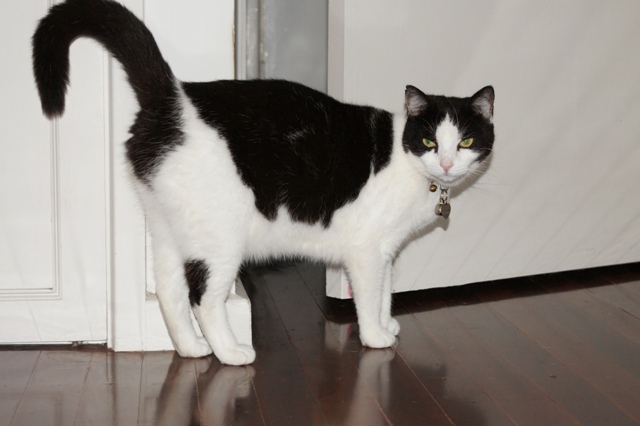 18 Responses to Oh What a Week! Fingers Crossed for Fergus.