I’m not sure about my nursing prowess.  I’m quite good at fussing, but nursing?

Our feline heroine is none too impressed with her caged environment.  I’ve actually put her cage up on the end of the bed so that she can see out the window down to the garden when she’s not sleeping.  The bedroom windowsill is one of her favourite spots to sit, so I thought that was appropriate. 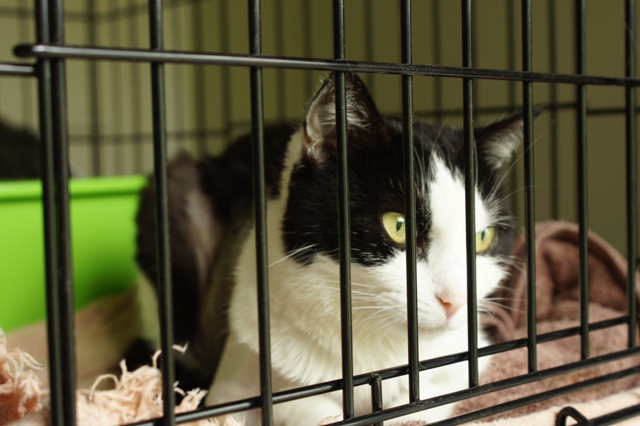 Checking out what’s happening in the garden

Flo is allowed in and out of the bedroom but it’s totally off-limits to George.  He’s not happy about that and tries to get in at every opportunity.  I think Fergus has caught sight of him once since she’s been home.  In her new accommodation, Fergie has a new, deep litter tray, a bowl of water, some towels and a new little bed.  The bed is a later addition – I’d put it in before and there was no room left as ‘walking space’ so I took it out, but I put it in again this afternoon and she was straight onto it, padding away, and she hasn’t come off it since, so I think it’s a winner.  She’s had beds before but has never slept in them.  I think it’s more comfortable to lie on than the towels on the hard tray.

When I first put her into the crate she spent about an hour clawing at the bars or at anything she could reach through the bars, including flesh.  My flesh.  I did have a feeling that she would be a bit unsettled when she first got home because she would expect to be able to wander around in her own environment.  However, she seems to have settled down over the last 24 hours.   She’s really hungry but I’m sticking to what the vet said in terms of food.  Her wish to eat was thoughtfully conveyed at 2-hourly intervals during the night when she would claw me through the bars and meow.  A little bit of attention in the way of chin tickles and pats seemed to sort her out though.  The other thing is that the food is going in but it’s not coming out the other end yet.  She’s using the litter tray, but nothing of any substance (so to speak) has appeared as yet.  I’d feel more comfortable about letting her eat a little more if I knew that it wasn’t backing up in her system.  She’s enjoying lots of attention, albeit either through the bars or through the open door of the cage.  I haven’t picked her up… I’m not comfortable picking her up at all though the vet did show me how they’d been doing it, when necessary.  I just feel as though she’s held together by stitches at the moment.

Now to a technical issue… air temperature… HOW WARM OR COLD IS IT SUPPOSED TO BE IN HER ROOM??????  One half of her is furry and the other half is shaved.  I’ve got the air conditioner on for her… but is it getting too cold?  When I switch it off it warms up so quickly… ARGH! She’s in her bed, shaved side up.  Is she shaved side up because she’s more comfortable like that or because she’s too hot?  She doesn’t feel cold to touch (except for her ears).  ARGH!  I put the aircon on because she’s spent nearly 2 weeks in an air conditioned environment.  As she is a cat who prefers to be outdoors, she’s normally in the heat all day, with air conditioning at night if she chooses to come into the bedroom, but then she’s inclined to snuggle in for a bit of warmth.  ARGH!  Maybe that’s why she’s so pleased with the bed… she’s too cold… ARGH!

The v-e-t would like to have her back in the surgery during the week as I won’t be at home all day and I agree that that’s the best place for her when I’m not at home.  So, 7.45am on Monday morning we’ve got to take her back and give him an update on the weekend. At this point, I need to say three cheers for the v-e-t.  I received the first bill when I picked her up yesterday.  He’s billed me for three quarters of what is actually itemised.  One of the things I noticed is that he’s only listed one consultation, and at a reduced rate.  I’ve seen him at least TEN times more than that, and never for less than 20 mins.  Even though I joke about the vets living mortgage free and driving around in new trucks because of the amount that I’ve paid over at the surgery over the last few years, I fully acknowledge that a vet with more than 30 years experience has been coaxing my cat to eat by spoon feeding her, and hasn’t even charged me for the privilege.

Poor little Fergus, she’s got a long road ahead of her, but thankfully she won’t be on it alone.  Flo and I will be right there with her.  George… not so sure about that.

This is a blog hop.  Follow the link to join in.