A page by Flo

Name:      Flo / Miss Fabulous / Mme La Flo Flo
Sometimes my name is preceded by Argh!  I think it means ‘thank you’ because I usually hear that when I’ve taken the washing down for the boss.  I would fold it up for her too but I don’t have disposable thumbs so have to just leave it lying on the floor. 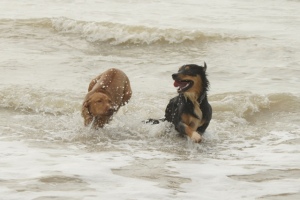 Going to the beach;
I LOVE the beach – there are so many other dogs to play with, so many things to sniff and you can run in and out of the water.  Digging holes is much easier in sand too.

Bones;
Bones are one of the few things that keep me busy for AGES.  I like nothing more than lying on my bed with a frozen bone.  Marrow are the best.

I can't get out

These come a close second to bones, but in all honesty, they just don’t last long enough.  They used to keep me out of mischief for ages but now that I’ve got my big teeth I can demolish them in a matter of minutes.  I’m not sure what my record is.

Dislikes:   Getting washed; having toes checked for ticks

Hobbies:  Taking washing off the line;
I could do this all day.  I’m getting really good at going downstairs really quietly and doing it as a surprise.  The boss has even stopped using pegs because it was harder for me to pull the washing down and I sometimes had to make holes in things to get them off.

Eviscerating cushions;
I don’t get to do this very often because the boss has decided that the store room is the best place for cushions now.  I’m not sure why – it’s not like she gets to use them while they’re in there.  I’m always amazed at quite how much stuffing they manage to get into one of those things.  The foam ones are really difficult to get to but they’re so worth it.  Did you know that the foam from one cushion fills an entire wheelie bin?

Chewing reticulation;
I just love the anticipation of wondering where the water’s going to appear from next!

Chasing George the cat;
Well, what can I say, he just asks for it.

4 Responses to A page by Flo